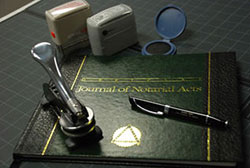 We provide Notary Public services directly from our Bournemouth office and when combined with our professional translation services, this enables us to deliver documents that you can use in the country of your choice and all at a great price with all the guarantees of a real business with insurances.

Our head office in Bournemouth provides Public Notary services including notarised translations and Apostille documents to all local areas directly including Bournemouth, Poole, Christchurch, Dorchester and the rest of Dorset but we also privide service to Hampshire, Wiltshire and the Isle of Wight. If you're local, why no pop into our office and talk to us in person, otherwise give us a call or send and email and we'll be happy to help. We can directly notarise French, Italian, Spanish, Romanian and Moldovan documents.

What is a notary public and what do they do?

Notaries's work has been of great significance since Roman times. The Romano-canonical procedure was a written procedure; it placed importance on written evidence. The canonical procedure could ask for a notarised records of the deposition. This was dispatched in due course to the trial court. Notaries were considered to be providing the most authoritative (which could not be contested) form of written evidence. Therefore notaries became a central element in the formal procedure used in the court. Furthermore this lead to the use of notaries by private individuals in trying to ensure the contract was enforceable (if notarised) and in securing proof that it existed. Therefore the best evidence available to them was a notarised contract ( similarly this was extended to other types of translations)

Why the name of notary public?

Historically, Rogerius and his successors coined the writing of notaries as being "public" and the product of their pens as a "public instrument". The Roman notary was identified with public authority. He was credited with the capacity of telling the truth. Notaries, like magistrates were seen as public figures and the work carried out by them was done by a public hand. This meant that the documents they issued carried out authoritative weight. The medieval notary was seen as a public trustworthiness figure. It has been argued that although the writings of a notary resemble that of scribes, the weight was different, as the notary's writing was seen as irebuttable; no higher officer could review them. These writings were guaranteed by the authority of the notary as a persona publica. The public instruments issued by notaries are called publicationes because they make the writing public, authentic and trustworthy. The office of the notary is a public office, naturally for the benefit of the public. A notary has the quality of a persona publica from being commissioned by the pope or the emperor and he qualifies as a persona publica by delegation from a public authority.

The year of 1215 puts an emphasis on the written record and notaries, as persona publica vested with public trust provided it. Even from Justinian's times a contract that was notarised was good evidence that it happened and the procedure surrounding the contract was followed. Therefore it has been said that that scriptura publica was the creation of the notary. The writing done by a notary caries the presumption that it is true, formal and that it occurred and is proof proven. According to Fenzio " the notary is called the judge's eye" However for a notarial act to count for something in court it had to be formally and substantively correct although the notary was not necessarily expected to have legal knowledge. Were notarial documents irrefutable proof in medieval and early-modern legal civilian thought? The jurists said that they made a living from making public scriptura and therefore if one makes a living from this, the demand must be high.