We provide professional language interpreter services in West Midlands for all languages. Bostico offer a wide range of Interpreting and Translating solutions to tailor your need where communication in a foreign language is required. The West Midlands is a metropolitan county in western central England. It came into existence as a metropolitan county in 1974 after the passage of the Local Government Act 1972. The county consists of seven metropolitan boroughs: the City of Birmingham, the City of Coventry and the City of Wolverhampton, plus Dudley, Sandwell, Solihull and Walsall. Bostico has been providing interpreters and international language services in the UK since 2003. Our translator and interpreter services are available throughout the West Midlands including in interpreters in Birmingham, Coventry, Wolverhampton, Dudley, Sandwell, Solihull, and Walsall but We also offer services in other towns. Contact us for further information. Birmingham is a city and metropolitan borough in the West Midlands county of England. Birmingham is the most populous of England's core cities, and is the second most populated British city after London All languages are available including French and Mandarin Chinese. Please note that while we're able to provide interpreter services in West Sussex, we are unable to guarantee your interpreter will be from the local area. 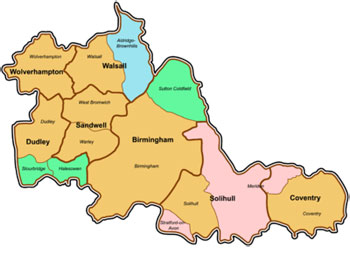 Our skilled team combines accreditation from the IOL, ITI and NRPSI to give you the best interpreting services available (conference, police, hospitals, court, business meetings, etc) We can supply an interpreter in the language of your choice.

If you are an interpreter or a translator and you think you have got what it takes to be a good linguist, then we would like to hear from you. Please send us your CV and do not forget to include your location and your contact numbers in the cover letter.