We provide professional Tetum interpreters for telephone and video conferences and face to face meetings. Tetum is classed as an extremely rare language in the UK because professional linguists are uncommon. If you're struggling to find a Tetum interpreter, give us a call! Tetum (sometimes also known as Tetun) is the national language of East Timor which is an island country in Southeast Asia. While the Tetum language borrows a lot of words and phrases from Portuguese, they are unfortunately not interchangeable or mutually intelligible. Tetum is spoken by around 500,000 native speakers with Tetum-Praça and Tetum-Dili as the even more rare Tetum-based creole langauges. 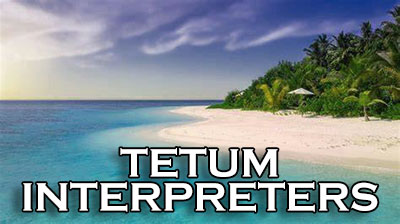 We provide Tetum translators and interpreter services. Professional Tetum Interpreting Services are quite rare in the UK but we can still provide linguists for face to face meetings in person or by video conference and also over the phone so if you're looking for a Tetum translator, you've come to the right place. We can also translate Tetum documents and provide certified translations for use in legal, medical, or technical fields.